“There is no royal road to the solution of smoke.” — St Louis Post Dispatch
on November 28th, 1939, we all go blind as an inversion chokes the city
I blow the coal dust out of my nose until my sleeve is ruined
Remember this? How we tamed nature and killed it? We said we were sorry, we just didn’t know
it couldn’t live in captivity
when the sun doesn’t come out for the 9th day in a row
I think of you kissing me and nothing else

carbonite solarite
this can’t go on forever
you call me your dirty girl and I think “high-sulfur, bituminous,
I’m your dirty, dirty coal”
back at the house we replace the floors
crooked windows and doors
I tell you about my past life as the smoke commissioner
how I did my best
but it wasn’t enough 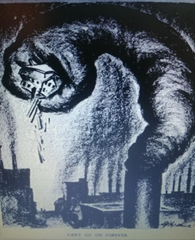 On November 28th, 1939, St Louis, MO had what Wikipedia calls “a severe smog event.” In actuality, St Louis had been having air pollution issues almost since its founding; the city passed its first smoke ordinance in 1893. By the 1930s, St Louis was the most polluted city in the country. In large part, the smog was due to the use of “soft” high-sulfur, bituminous coal mined from southern Illinois just across the river. Bituminous coal burns “dirty,” but it was cheap and there was tons nearby, so everyone used it.

Seventy years later, my parents bought a house that was built on one of the old Peabody coal strip mines in the area. Each year, it sinks approximately 1/16th of an inch into the improperly re-filled mine, resulting in slanted flooring and crooked doors/windows. Set something round down and it will make its way across the room.

It’s also a way of self-soothing about climate change, because I feel powerless.

Holly Salvatore is a farmer in Boulder, CO. They tweet @Queen_Compost, and are excellent at naming chickens. Find them outside.

The Wellington Street Review is currently on hiatus.